The cinnamon & yellow-side of the green cheeked conure 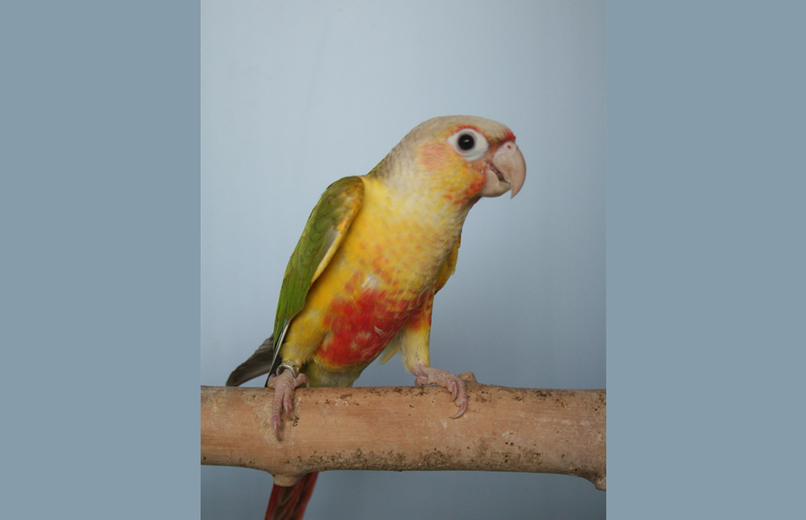 It started by the blue color variation

In the first years, I raised many different unrelated bloodlines of the blue molinae, to avoid inbreeding.  Then I tried to intensify the blue color by selective breeding.  As the first blue catharinaparakeet at the end of the eighties, looked mare sea-green than blue, the same happened with the first blue molinae.  With the contribution of the most deep-green colored original birds and at the other hand selecting intensified blue color is the present generation greencheek obviously more blue than the first generation (1992) just analogous as the blue catharinaparakeet.

By way of information: the blue mutation devolves recessive.
In combination with the original gives:

For the other mutations, I had to wait until 1998.  Then I came into contact with a breeder from California who has himself the cinnamon and the yellow-side as color variations, and so he was strongly interested in the blue mutation.  After one year phoning and faxing to and fro, I finally got hold of 2 couples cinnamon and   couple yellow-side.  I never saw them before alive.  I have to tell you , I was rather impatient to expect both mutations end ’98.

The cinnamon : an amazing bird with great color contrast in comparison with the wild color

In contrast with other birds, the difference in color is very large in comparison with the original.  Of this splendid colorvariation – who’s developing gender depending – I had a first breed beginning ’99 who confirms the cinnamon mutation.  At birth, the young ones had wine-red eyes who became darker after a while.

The yellow-side or molinae hypoxantha Salvadori: First a piece of history

In the 4th book “Sudamerikanische Sittiche” Thomas Arndt makes report of this moliae hypoxantha Salvadori.  Salvadori himself discovered in 1900 three yellow-sides among a flock of greencheekparakeets.  Later, there’s nothing heard about this.  In the same book, Thomas Arndt writes that some ornithologists doubt if it’s a different kind of pyrrhura or if it’s an aberration of color of the pyrrhura molinae.  In the more recent  ‘Lexikon der Papagaien” (part4-page 250) the same ornithologist Thomas Arndt writes, that ‘s sure, it’s a mutation of the greencheekparakeet born in nature.  Also this mutation comes up to my expectations.  Only about inheritance, the Californian breeder couldn’t give me more adevice.  Probably because he only crossed yellow-side x yellow-side, what gives 100% yellow-side youngs.

Already in the beginning of ’99, I had 2 young males of this couple.

First breeding unrelated : a ‘must’ to strenghten mutations

All young ones of ’99 were kept to breed unrelated bloodlines in 2000. About the breeding results of the cinnamon I was sure, because the Californian breeder confirmed de sexually dependant inheritance.

I was not sure about the result of the yellow-side, because the same breeder from California couldn’t give me advice. Joining two males from ’99 with unrelated blue females gave me yet in 2000 unexpected results (see later).  But the breeding of 4 yellow-side young ones in  (2 males and 2 females) confirmed the gender related inheritance.

The wildcolor young ones from this yellow-sides were true wildcolor.  This confirmed the train of thought by Thomas Arndt, that the yellow-side is a mutation of the molinae.

Next is looking for two new mutations: The blue cinnamon and the blue yellow-side !

I combined from both cinnamoncouples from California, each time a young male 2000 with a total unrelated blue female. From this I breeded, from couple A en B in 2000 green/blue and cinnamon MALES and cinnamon/blue FEMALES.

The breeding of ’99 – two yellow-side MALES – were brought together with two total unrelated blue females.  I was very surprised in 2000 when I got in total 6 pure yellow-side/blue FEMALES and 4 pure green/blue and yellow-side MALES.  This result pointed clearly to sexual inheritance, which was confirmed by the breeding of 2001 (see higher).

Via bringing together of males from couple A with females of couple B (and reversed) I hoped to have this year the first blue yellow-side. The chance for that was as little as for the cinnamon 12,5 %

But again I was very happy to see the first blue yellow-side in the nest.  The intensity of blue on his back contrasted very well with the pale surrouning feather of the breast and those below the wings.  By endoscopy it seemed to be a MALE.  This was interesting because of the gender inheritance.

My first breeding results of this colorvariation of this robust molinae molinae suggests also a gender related inheritance, but this species doesn’t breed as easily as the real yellow-side.  So I will try to confirm it in the future.

New challenges for the next years

In the coming years I go for the next challenges :

Conclusion : 10 interesting points of the pyrrhura molinae in a nutshell