The first turquoise yellow-side & turquoise pineapple of the pyrrhura molinae 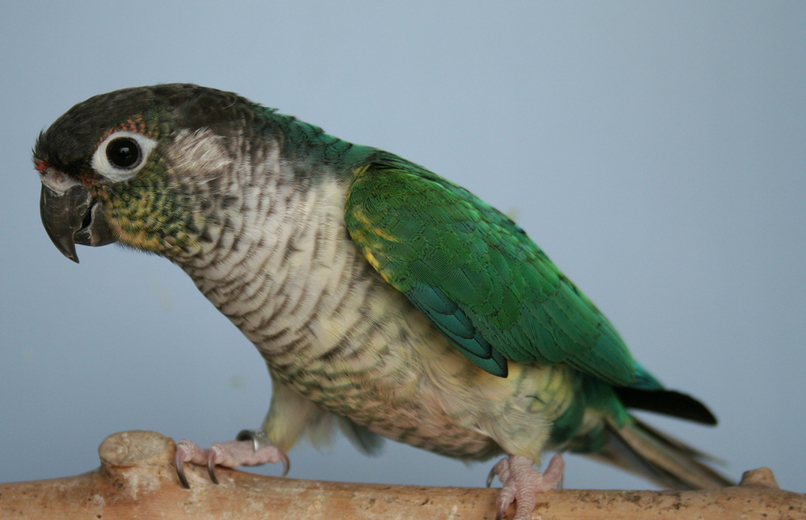 First challenge: keeping on breeding the blue cinnamon and the blue yellow- side through new non-consanguineous blood-ties

By annually buying primarily wild-coloured molinae, I have succeeded in breeding quite a lot of birds with new non-consanguineous blood-ties, which has had a positive effect on the size and the strength of the various mutations. I have chosen wild-coloured molinae because I was quite sure that these had no blood-tie with my own birds. As one of Europe’s pioneers in breeding mutations of the pyrrhura molinae, there was a good chance that, if I bought mutated birds, these would still be consanguineous with my birds.

From 2001 onwards, I have paired cinnamon MALES with yellow-sided FEMALES and vice versa. All of this in the effort to breed double-split MALES. These combinations have produced the following results:

These three specific combinations have led to the first pineapples, which were always FEMALE! The first MALE pineapples could only be bred in the next generation combining the previously mentioned FEMALE pineapples with the double-split MALES.

These pineapples are very popular with many bird-lovers because of their vivid colouring. The green-hemmed pattern of the yellow-side changes into a cinnamon-hemmed pattern and can hardly be noticed. As a consequence, the yellow on the flanks and under the wings, as well as the red on the belly is much more intense. The head is also significantly whiter than with the ordinary cinnamon.

This third challenge turned out to be far more complicated: breeding three existing colours in one and the same bird (blue + cinnamon + yellow-side)! From my firstly bred FEMALE pineapples, I had selected a number of birds which were paired with blue, completely non-consanguineous, MALES. This combination resulted in triple-split MALES because:

These birds look like the blue cinnamon, but are paler! Under the wings and on the flanks, the feather colour is rather white-yellow than cinnamon blue. The chest is also significantly whiter and has a small hemmed pattern (cf yellow-side). The belly sometimes has a light pink shine, a remainder of the red chest mark of the yellow-side. This makes the contrast with the blue cinnamon on the back even bigger. The head is also whiter than with the blue cinnamon.

The blue yellow-side with YELLOW strap on the shoulder

These birds are really magnificent and their head feathers are sometimes a touch lighter in colour. But it is a fact that the yellow strap is hereditary!

Breeding for over 10 years, but only since a few years the correct name: the MISTY, the blue MISTY and very recently also the blue yellow-side in MISTY

More than 10 years ago, I discovered in the nest of one of my blue molinaes a bird  which was far more grey than the then blue molinaes, which were at that time much more sea-green than the present blue ones born out of selective breeding.

Unfortunately, much of the grey colour disappeared once it had been exposed to natural sunlight. I have paired this grey-blue bird with a green/ blue one. The following year, this combination gave me the same grey birds, but also green ones with a more golden sheen, which was nevertheless also partially lost when exposed to natural sunlight. However … each time the birds went into the nest or in cages where there was less natural light, the contrast with the blue and green birds became very clear again.

After having bred other sanguineous lines, I have eventually paired two grey-blue birds. The result was a number of birds with even more intense grey, sometimes even with a brown-grey sheen, depending on the incidence of light. The same goes for the green series, where the golden sheen was also even more intense. In natural sunlight, a part of this contrast was again lost, but the difference with the blue or green birds remained bigger.

A few examples of combinations with MISTY birds: